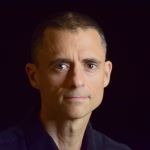 Robert McGill’s research focuses on creative writing and on Canadian Literature. His latest novel is A Suitable Companion for the End of Your Life, published by Coach House Books in spring 2022. His previous book, War Is Here: The Vietnam War and Canadian Literature, examines the war’s influence on Canadian identity. It follows his novel Once We Had a Country, which tells the story of Americans in Canada during the war era. His first novel, The Mysteries, was named one of the top five Canadian fiction books of the year by Quill & Quire.

Robert has published short fiction in The Atlantic, Hazlitt, Toronto Life, The Journey Prize Anthology, Grain, The Dalhousie Review, The Fiddlehead, The New Quarterly, and Descant. He is also the author of The Treacherous Imagination: Intimacy, Ethics, and Autobiographical Fiction, which addresses people’s sense of betrayal when they believe they have been turned into characters in novels or stories. In 2018, Robert was named a winner of the Robert Kroetsch Teaching Award by CCWWP (Canadian Creative Writers and Writing Programs). In 2020, he published the online anthology Canadian Literature of the Vietnam War.

War Is Here: The Vietnam War and Canadian Literature. Montreal and Kingston: McGill-Queen's UP, 2017.

‘That’s My Boy’: Challenging the Myth of Literary Mentorship as In Loco Patris.” Co-authored with Neil Surkan. Journal of Creative Writing Studies 3.1 (2018): 1-21.

"The Place of Biographical Interpretation in Fiction Workshops." New Writing: The International Journal for the Practice and Theory of Creative Writing (2015).

Director, MA Program in English in the Field of Creative Writing.